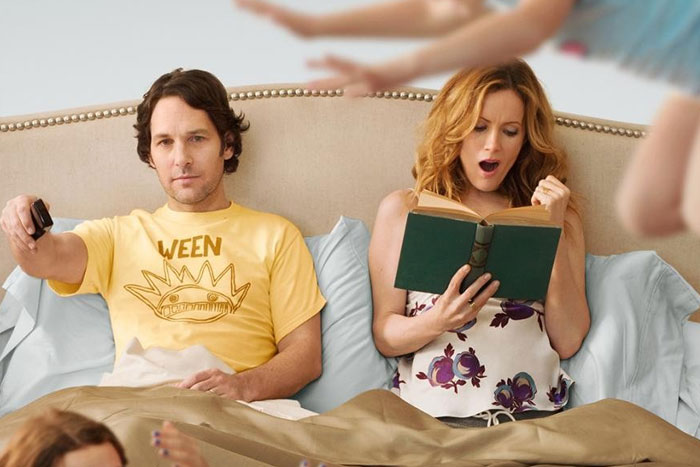 By The Walking Said
Thanks to Universal Pictures, we had the chance to see This Is 40 before its Australian cinematic release. This is our review of the film – but as usual – no matter what we say, we recommend that you still go to your local cinema and see the film because: There is no better critic than yourself! Judd Apatow (Knocked Up, Funny People, The 40-Year-Old Virgin) directs this modern-day sitcom set in a well-off Hollywood community which is a follow-up to the hit “Knocked Up” (2009) that reunites the same supporting stars. It’s a comedy about midlife crisis, featuring Apatow’s real wife (Leslie Mann) and two daughters (Maude and Iris Apatow) with Paul Rudd as his alter ego.

The story kicks off when Debbie and Pete realises that life is becoming more challenging as their 40th birthday approaches. Filled with frustrations of trying to make their marriage work, they face the same problem of lacking passion in their sex life and overseeing their rebellious children. To top that off, they’re straddled with financial worries like a staff stealing from Debbie’s boutique or Pete struggling with his record company, all the while as Pete deals with his free-loading moocher dad Larry (Albert Brooks) and Debbie reconnects with her estranged surgeon father Oliver (John Lithgow)

This film is filled with Apatow’s signature comedy as well such as fart jokes, a barrage of foul-mouthed chatter, grossed-out material, absurd rants and awkward moments when couples attempts at intimacy. It has continuous scenes of screaming children putting a damper on their parents’ sex life, invasive medical exams, flatulence as a bedroom problem and a centrepiece rant scene by Catherine (Melissa McCarthy) that best captures the films charming madness. On the serious side, it looks at the pressures of maintaining a marriage in today’s ever-changing society, a world undergoing economic crisis, raising kids to behave correctly, the tribulations of leading a healthy life as opposed to eating junk, keeping up appearances with the neighbours and stay in tune with a New Age of socializing through technology. It’s is more mature than Apatow’s previous films and all the characters seemed more comfortable in their skin in their own odd ways.

The audience will enjoy some of the supporting parts such as the likable idler Albert Brooks’ comic efforts to explain why it’s good to take money from your son; or Chris O’Dowd‘s role as the flunky working for Rudd who is trying to make his laziness a virtue; and Jason Segel as the smug physical trainer trying to claim credit for Mann’s tight ass. There were also appearances of Megan Fox and Melissa McCarthy (Bridesmaids) who steals every scene she is in with her hilarious outbursts. So whether it’s the secret cupcakes that Pete is constantly sneaking or Debbie’s smoking habit or just the simple flow of married couple fighting, This Is 40 is exceptional at capturing the absurdity of everyday life which we are all living (In fact, it’s amusing to think we’ve gone from The 40 Year Old Virgin to This Is 40 in a matter of seven years, all with the unflinching honesty of Apatow’s work!).  There is not an insincere moment in the film and to be able to mix humour, anger and observation into a simple and affecting work as this, is a real gift.

In essence, This Is 40 is a hilarious comedy that will catch the eye of young married couples and all who relates to real life as you will laugh all the way through. Plus, if you are up for a mouthful of fast jokes, awkward situations, lots of heart or an Apatow fan, then definitely don’t miss out on this film!