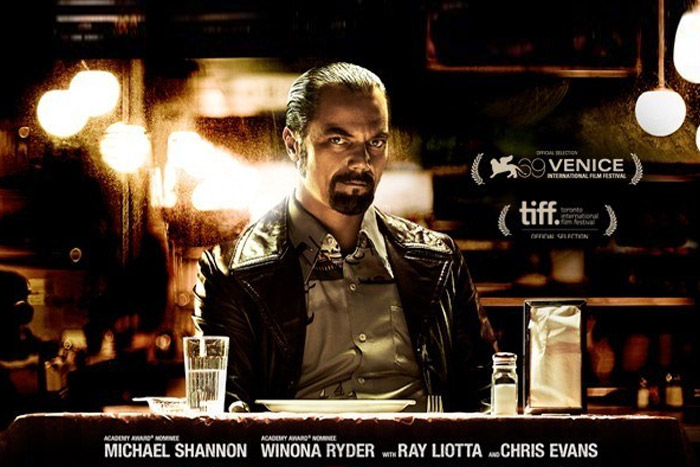 By Jules D.
Michael Shannon seems born to play villains. The actor, best known for his roles in ‘Boardwalk Empire’ and in the upcoming ‘Man of Steel’, delivers a chilling performance in this biopic about real-life New York hitman Richard Kuklinski.

This is the first big movie for Israeli filmmaker Ariel Vromen, and he has crafted a slick looking, well-paced crime epic. The end of story does get a bit confusing and even rushed, which gives the impression that some scenes might have ended up on the cutting room floor, yet with the movie clocking in at just 105 minutes it never loses the viewer’s attention.

Although Vromen did a more than capable job, this is really Michael Shannon’s movie. There is probably no other film actor out there right now that can contain so much rage in his posture and in his eyes which is unleashed with terrifying force. Although Shannon owns the film, the supporting cast assembled around him is great as well. Winona Ryder has her best role since God knows when as Kuklinski’s wife Debora and David Schwimmer plays a clumsy henchmen sporting a massive moustache and a greasy ponytail. For Sopranos-fans it’s great to see Mickey Scicoli, best known as chef Artie Bucco, pop up as another one of Demeo’s hot-headed henchmen. Ray Liotta and Robert Davi are just doing what they always do best. An almost unrecognisable Chris “Captain America” Evans deserves a special mention for his role as the wild haired “Mr. Freezy”, Kuklinski’s partner in crime and even his mentor when it comes to tricks of the trade; not only did “Freezy” introduce Kuklinski to his weapon of choice cyanide, The Iceman’s habit of freezing corpses (where he got his nickname from) was also copied from his colleague.

Although Mickey Rourke was initially approached to play the role of The Iceman and the real Kuklinski looked more like a slimmed down Ray Winstone or James Gandolfini, Shannon makes the role his own with a menacing performance. With the grim stare on his face he looks even more terrifying than the actual Iceman did. Yet he manages to prevent portraying the killer as a monster by balancing his life in crime with his life as a family man. But make no mistake: this is not like watching Dexter since there is no sympathy for the protagonist here; a revolting scene during which Kuklinski makes his first victim for Demeo shows what a disgusting person he really was.

‘The Iceman’ will be released by Roadshow Films later this year.