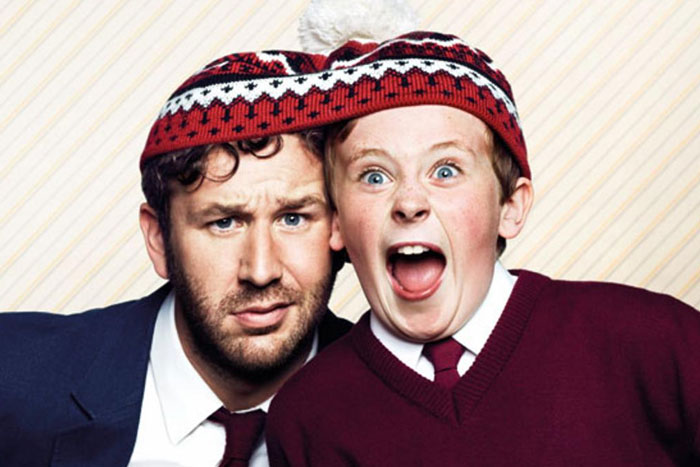 By The Madrina
Thanks to Roadshow Entertainment, we had the chance to see a funny Irish sitcom Moone Boy.

Written and produced by Chris O’Dowd (Bridesmaids, The Sapphires, The IT Crowd) and Nick Vincent Murphy, Chris co-stars as the imaginary friend of a 12-year-old Martin Moone, the youngest child of a family living in rural Ireland. While most boys dream up a superhero sidekick, Martin’s pal is a man of mid-30’s with a common name (Sean Murphy), sharing his creator’s unique insights, perspective and imagination of everyday life. This companionship helps Martin to get through his school trouble, friend circles, whims and wishes, bizzare schemes, not to mention a chaotic, scatter-brained family!

Told through Sean’s eyes, Martin’s adventures also speak from his childish drawings, made alive by animation which shows the inner workings of a boy’s mind, growing up in the 1980-90’s. Semi- auto biographical in nature, Chris O’Dowd said that it has all the experiences he had, no wonder he plays it so well, knowing what kids want or think, against better judgment which Murphy aims  to provide. More importantly, David Rawle is simply delightful as Martine Moone, bringing out that puzzling yet adorable quality of the character, suggesting both a genius and a simpleton at work in a little town.

Peter McDonald is great as Martin’s sign writer dad Liam who longs to be an artist; as does Deirdre O’Kane as his frazzled nurturing mother. The rest of the family is made up of Aoife Duffin as the emo Trisha, Clare Monnelly as the love-lorn Fidelma and Sarah White as the sarcastic Sinead – Martin’s 3 sisters who mocks but loves him at the same time (as all siblings do!) What’s more, Steve Coogan’s appearance as the local rich man lights up the screen every time with his quirky, eccentric charms.

We must not forget Martin’s friends (or foes), too which were enacted with so much personality and edge such Ian O’Reilly’s Padraic who seem a little queer, strange but nevertheless lovable; Robert Donnelly’s Trevor who is the new pushover kid at school; Brendan and Cillian Frayne as The Bonner Brothers who bullies everyone; and the brilliant Stephen Gillic’s Declan who is the ultimate cool kid. Filmed in authentic Ireland towns (Boyle, County Roscommon and Wicklow), the story has a real feel to it thanks to wonderful scriptwriting and superb acting. The humor is so intoxicating that you laugh at its hilarity and absurdity yet praises its witty commentary and observations on a boy’s growing up. For example, our favourite episode is Godfellas where Martin thinks the altar boys look so cool so he wants to be one of them, having consulted his family and friends. Upon joining, he realises it’s a dark tangled world involving alliances and tips, with the head of the gangs and members laying out rules for newcomers, much like a Mafia business. It is here that, of course, they play the Godfather music!

Talk about music, every episode is accompanied by ‘Tico’s Tune’ by Geoff Love  which has near-iconic status in Ireland as it was used as the theme tune for The Gay Byrne Show, a long-running, popular morning radio show on local RTE Radio 1. Other references of Irish trademark are made where critics of the show said it “could be the funniest to come out of Ireland since Father Ted…Martin Moone is the most life-affirming delight to have hit our screens in a long time. It is surreal, within decent limits and it is derivative but the derivations are happily, if tacitly acknowledged.” (The Guardian)

Hence, we highly recommend you to see Moone Boy as it is a fantastic show about the life of a witty, charming and cute boy who deals with coming-of-age thanks to his equally funny, likeable and sweet imaginary friend. It is great fun and you will enjoy its Behind-The-Scene and Photo Gallery as well!

As Time Out UK sums it up perfectly, “It’s an absolute charmer!”.