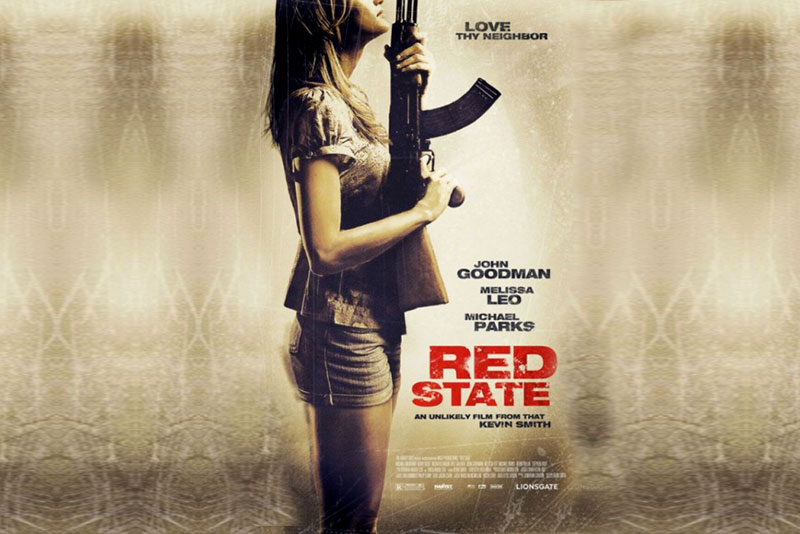 Thanks to Curious Films, we had the chance to see the great comeback of director Kevin Smith to the big screen, with his new film ‘Red State’. This is our review of the film – but as usual – no matter what we say; we recommend that you still go to your local cinema and see the film because: There is no better critic than yourself!

Red State tells the story of three teenage boys seeking for group sex with Sarah Cooper (Melissa Leo) after one of them made online contact with her thus arranging this encounter. All this happens in Cooper’s Dell, the home of the Christian fundamentalist Five Points Church.

What they never expected was that this was a trap from a group of religious fanatics, and an entire family which follows a leader, Abin Cooper (Michael Parks) who wants to clean the word of sins and perversions, such as homosexuals and sex, punishing every kidnapped victim they captured until they die part of the rituals.

All seems to work for Cooper, until an ATF Agent Joseph Keenan (John Goodman) starts to investigate in Cooper’s Dell, unleashing a small civil war against Cooper and his followers.

Every time Kevin Smith is behind a camera, the excitement of his fans is notorious, and this film is not an exception. The film is a more mature movie, totally different than his old classics Clerks and mall Rats, just to name 2. The film is far from being a comedy; it is a violent and gory film, where Smith unleashes all his freedom to do a film. With no big sponsors and film distributors telling him what to do he didn’t have to limit his creativity and the result is a film that is 100% Kevin Smith from the script to the final product.

It’s great that Smith attacks a topic so taboo like the religious congregations in this film, and perhaps this was one of the reasons why the film got so many delays. Furthermore, while watching the film, we could not stop thinking on how real some of the things happening on the screen are.

The core of the movie is the “must win an award” performance of Michael Parks. He nails his role as Cooper, even in a very long (maybe too long) scene in which he gave his response in the church to transform himself in a total psycho later on, becoming a mix between the Simpson`s Reverend Lovejoy , Jack Torrance (The Shinning)  and  the “Hobbo with a machinegun”.

The film could be divided in 2 parts, the plot with the teenagers been kidnapped and the massacre of people while the agents are fighting against the religious fans, being John Goodman the one shining on these sequences.

Red State however has a big enemy and that is the misdirection in the marketing before the release of the film, that made everyone think this was an horror film, especially with the first posters online. The film should be considered more like a Tarantino-Rodriguez’ ‘Grindhouse’ style movie a far cry from the original stigma of horror film.

Another issue is perhaps the abuse of some very long narrative scenes that made some parts confusing, we understand Smith loves this, but sometimes they become endless.

Smith must be proud of this film, especially after defeating everyone who wanted to touch his creation and changed it, showing to all his followers how much passion he put on this. This weird and unique strategy, secured him an audience that demanded to see the film, giving the independent filmmakers a clear demonstration that not all the hope is gone yet. However, in our very own opinion, this is far from being Smith’s masterpiece. On the contrary, it is perhaps the beginning of a new Kevin Smith that we`ll see back for his 2 part Hockey film ‘Hit Somebody’ that is supposed to be his final movie… (Hopefully not! We are dreaming with a Jay and Silent Bob comeback!).

A must watch film! especially if you wanna see something different than the classic Hollywood blockbusters.

Red State is currently showing in some Australian cinemas.