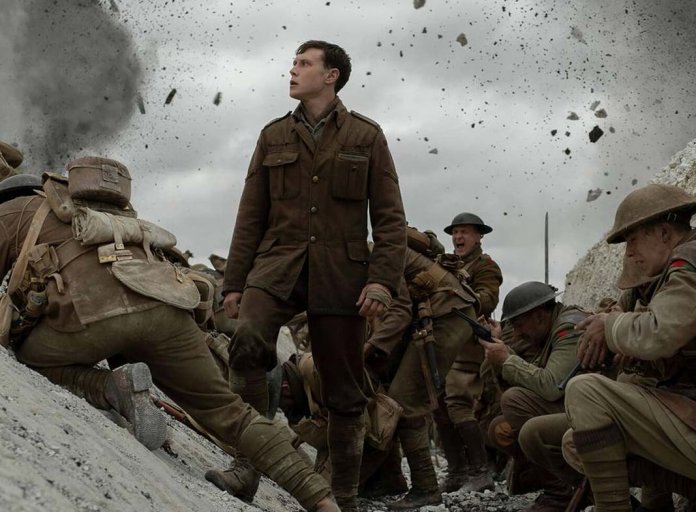 It’s almost impossible to describe how awful the First World War was, and because of its overwhelming, despicable absurdity and lack of a clear villain, it’s seldom used as a backdrop for war movies. Usually, First World War movies are tragedies, or sometimes even satires, but without those morally unambiguous Nazis to clobber, no-one’s happily cheering a hero’s charge into a no man’s land full of barbed wire, rotting corpses and hails of machine-gun fire. In 1917, Sam Mendes has teamed up with cinematographer Roger Deakins once again and come up with a story that showcases (some of) the horrors of that conflict while sending two characters on a heroic adventure for us to be thrilled at. 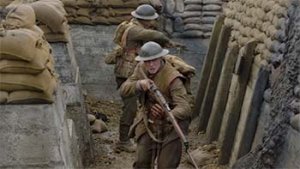 Schofield (George MacKay) and Blake (Dean-Charles Chapman) are given orders to get a message to an isolated battalion that is about to charge into a German trap. With a strict time limit and a perilous route through enemy territory to follow, the two lance corporals set out to save the lives of nearly two thousand men.

1917 is a truly exciting film, due in no small part to its staggering production values and Mendes’ use of a “single shot” technique that seamlessly blends takes into one continuous scene. Happily, the latter doesn’t call attention to itself too much, but ramps up the tension relentlessly and leaves you breathless on more than one occasion. For a film set in one of the bloodiest conflicts in history, the violence isn’t quite you’ve come to expect expect in the post-Saving Private Ryan era but when it hits, it hits hard. There are multiple moments that are so stunning that they are seared indelibly into your brain. 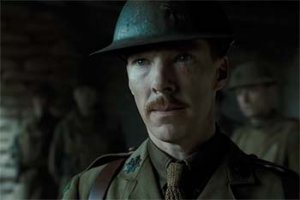 If the film has a weakness, it’s that it’s telling an adventure story with a backdrop that overshadows its human interest. Rather than give us insight into the war or the fighters’ mentalities, it uses it as an entertaining means to an end. To be fair, this is not innately a bad thing, it’s just that when you’re following the leads through something as vast and horrifying as the trench warfare depicted here, it makes the main story seem rather slight. When every other soldier is charging terrified into a fusillade, by comparison the stealthy quest of MacKay and Blake seems less brave than it otherwise could.

This really isn’t a particularly thoughtful film, but it is a stunning one and it gives a visceral glimpse into the First World War without being utterly enervating. It’s a great wartime adventure film that also functions something like a virtual reality trip through the trenches. This is a film you have to see on the biggest possible screen: Don’t miss it at the cinema.