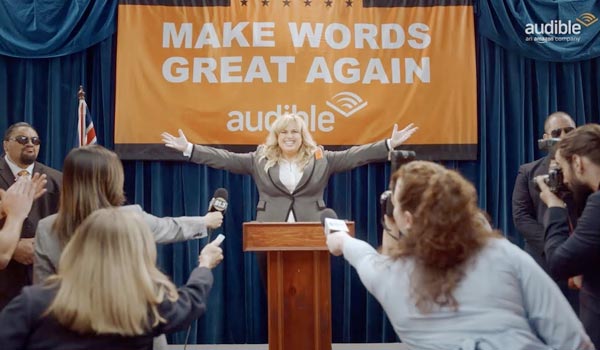 Words have lost their meaning and are being misused and neglected in Australia, according to the self-appointed ‘Minister for Words’, Rebel Wilson. The actor and comedian has teamed up with the nation’s leading audiobook and audio entertainment provider, Audible.com.au, to encourage Australians to rediscover the power of the spoken word.

According to research commissioned on behalf of Audible, Aussies are keen to broaden their minds and to feel inspired by the words they consume, with 80% of Australians feeling their conversations are becoming more negative, citing dishonest politicians (46%), depressing news (43%) and negative leaders (39%) as the most common reasons. Aussies are also looking to be positively impacted by the content they consume in 2019, with over half of those surveyed yearning for positivity and inspiration in the words, stories and public figures they come into contact with throughout the year.

Wilson and Audible have launched a hilarious new video in the style of a political campaign that showcases how audiobooks can reintroduce Australians to substantial and meaningful words that inspire, entertain and expand their minds in a positive way. The video explores how banal conversation, fake news, poorly chosen language and uninformative social feeds can bring people down and leave Australians feeling empty and uninspired, while Audible offers an enriching alternative.

Wilson is joined by several familiar Aussie faces in cheeky cameo roles such as comedian and national radio host Tanya Hennessey as an unenthused gym goer, WSFM breakfast radio host Brendan “Jonesey” Jones reprising his role as a chauffer, and comedian Jordan Raskopoulos as an avid Audible listener who has learnt about 17th century agricultural practices. The video declares that Australia deserves better and proposes that we choose the words we listen to wisely.

Rebel Wilson, self-appointed Minister for Words, said: “Australia is a nation of great speakers, from Gough Whitlam to Magda Szubanski, but we need to remember uninspiring words can really bring us down. So, whether you’re a Parliamentary MP or a party MC, plug-in and broaden your mind, be entertained and embrace the power of great words with Audible!”

The research1, commissioned on behalf of Audible, found that many Australians are committed to consuming more meaningful, inspiring and educational content in 2019, with millennials more committed than their older counterparts to consume this type of content. The recent study also revealed:

Nick Enfield, Professor of Linguistics at University of Sydney and Director of the Sydney Social Sciences and Humanities Advanced Research Centre said: “All words change over time, but the function of language and words has dramatically shifted in the last few years. Our leaders and public figures are often custodians of and innovators for the words we hear but the research shows Australians believe the value of words and our conversations are in decline.”

“Luckily, finding inspiring and educative content is just a click away, so Australians should feel empowered to choose our words, and the words we listen to, wisely.”

Leanne Cartwright-Bradford, Country Manager, Audible.com.au said: “Listening to quality audio entertainment from best sellers, audio documentaries and memoirs is the perfect way to reignite our passion for great words. With over 300,000 audiobooks and audio shows, Audible offers you an easy way to transform your mind and time. Transport yourself to the mystical halls of Hogwarts on your morning commute, get motivated with Mel Robbins’ ‘Kick Ass’ while exercising, or relax before bed with ‘Big Little Lies’.”