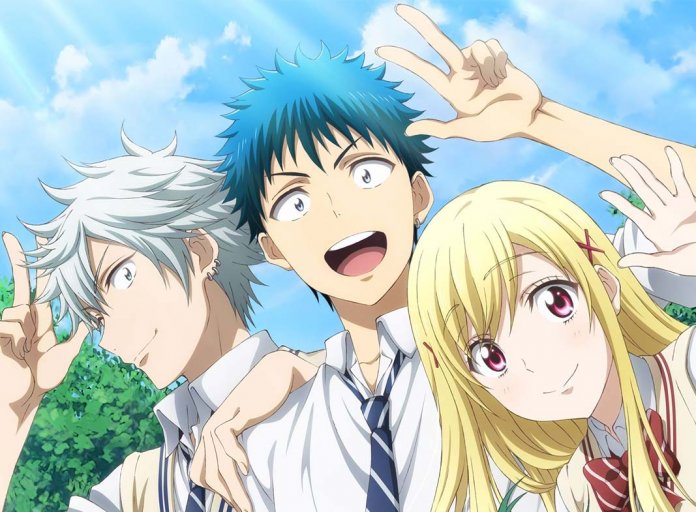 Thanks to Madman we had the chance to see Miki Yoshikawa’s romantic comedy ‘Yamada-kun and the Seven Witches’ (Yamada-kun to 7-nin no Majo), which aired in Japan in 2015. 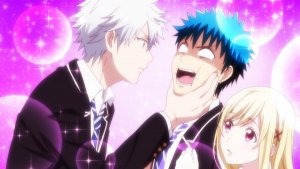 The story begins when Ryu Yamada, who is regarded as a school delinquent for slacking off in class and violent behaviour, trips and falls down the stairs knocking out her classmate, the honour student Urara Shiraishi. When they wake up from the fall they shockingly discover they have swapped bodies.

After a bit of a struggle with their new appearances, they realise they can swap bodies every time they kiss. They both try to keep it a secret, but they abuse their power and are soon discovered by Toranosuke Miyamura who suggests they re-form the Supernatural Studies Club to investigate. Later on, Miyabi Ito (who is obsessed with the paranormal) asks to join too. The four of them find out about the legend of the seven witches at their high school, who each possesses a different power to unmask using Yamada’s extraordinary ability to copy their power by kissing them. 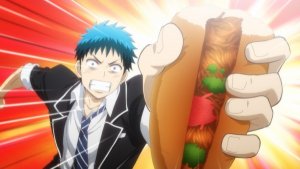 The anime is an enjoyable romantic comedy that amuses in every episode. The twelve episode series is not harem-styled as its name suggests but, unusually, focuses only on Yamada copying the witches’ powers whenever the club discovers them.

Since the special abilities are transferred by kissing, there is plenty of same- and opposite-sex kissing, making for hilarious situations and some of the series’ funniest moments.

The storyline is very well written with an intriguing premise, plot twists and plenty of comedy that even allows some time for teenage romance. The only fault of the series is that it feels rushed by its short run, not leaving much time for character development or grand explanations. Despite this, the solid writing and the beautiful illustrations create a great bunch of characters with unique personality traits that makes the anime highly entertaining and interesting.

‘Yamada-kun and the seven witches’ is a must-watch series. Madman brings the complete series to Australia on high quality Blu-ray. The extras include textless opening and closing songs. Get your copy here.