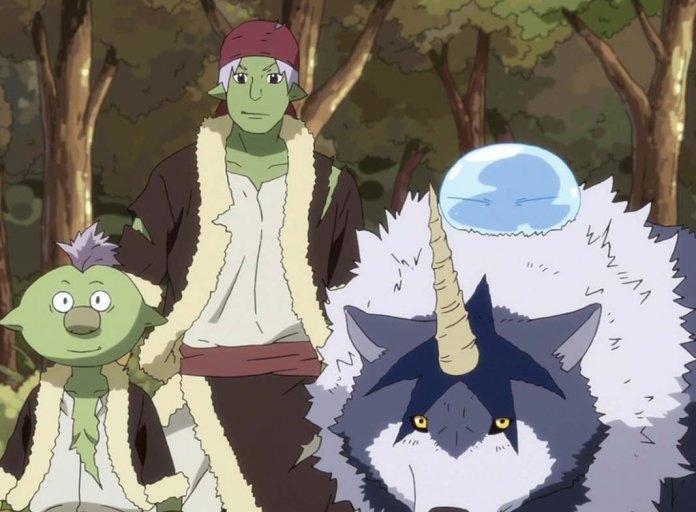 Thanks to Madman we were able to watch the first 12 episodes of “That Time I Got Reincarnated as a Slime” (Tensei Shitara Suraimu Datta Ken) which aired in Japan in 2018.

Satoru Mikami, a 37 year-old office worker is killed in a bank robbery trying to save his apprentice. Suddenly, he wakes up in a different world reincarnated as a slime. 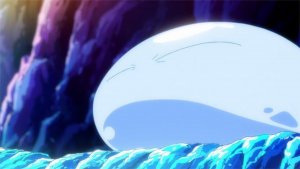 Now completely useless, Satoru spends some time inside the cave where he woke up not knowing what to do with himself until he finds the Storm Dragon Veldora who has been imprisoned there for years. They rapidly become friends and make an agreement where the slime agrees to absorb Veldora to free him from his eternal imprisonment. Veldora agrees and gives him a name: Rimuru. In return, the slime gives him a last name: Tempest. After absorbing him, the slime becomes “Rimuru Tempest”, now possessed of a huge amount of power.

Rimuru leaves the cave to see the new world, but since Veldora has been in prison, all the low-life monsters have come out to take over the forest. In his travels, Rimuru meets a goblin that asks for his help as his village is under attack. Rimuru agrees to help without knowing the consequences. Rimuru gives a name to all the goblins in the village, taking a toll on his health. Immediately, they swear loyalty as they evolve into stronger beings when named. Rimuru, now their leader, plans to make the village flourish.

“That Time I Got Reincarnated as a Slime” is part of the Isekai genre, were a normal human is somehow transported to a parallel magical world. They usually follow a storyline something like an RPG were the main character travels, meeting new friends and foes. Rimuru does exactly that. He travels around helping people with his powers defeating every foe in the way of a better world. 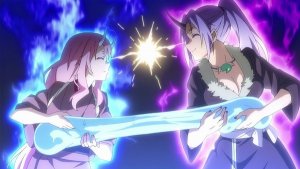 Despite its silly title, the series is very entertaining. Rimuru acts like a mature adult trapped in his new slime body. He usually makes thoughtful decisions, not rushed ones like the usual teenage characters. However, being an adult doesn’t mean he is boring. The fact that he was a virgin in his previous life results in a lot of funny scenes and fan service with the elves in the village. This Isekai also has a satisfying ratio of fights, and killing foes is not an issue. In fact, the bright colours and the great animation make the battles pretty amazing to watch.

“That Time I Got Reincarnated as a Slime” is a fun anime, and we highly recommend it to all fantasy anime fans.