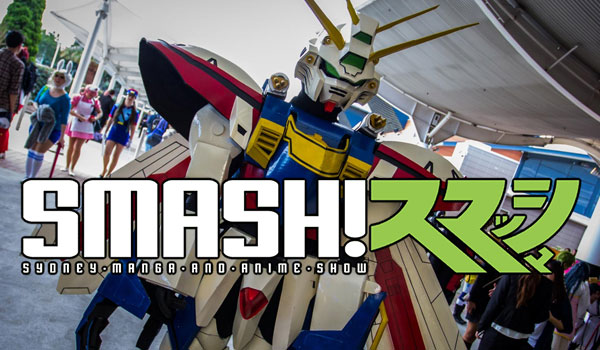 For Australian geek fans of manga, anime, and all things Japanese pop-culture, SMASH! Sydney Manga and Anime Show proved to be a triumphant success at this year’s event.

Bringing together enthusiastic cosplayers and anime fans from all over Australia, a new record of over 13,000 attendees attended this year’s two-day convention at Rosehill Gardens.

SMASH! Sydney Manga and Anime Show is an annual anime festival that is the perfect place for fans in search of unique guest panels, cosplay competitions, anime screenings, manga and anime merchandise, and industry workshops.

For a convention that has grown in size and events, SMASH! 2014 was the first two-day convention held at a new location in many years, and SMASH! President Ray Elinon was “surprisingly overwhelmed by the general positive feedback”.

“SMASH! 2014 has been a huge year for us, and it is good to see that our fans still love what SMASH! has got to offer,” Elinon said.

“We would like to thank everyone who has continued to support SMASH! over the years. SMASH! 2014 would not have been successful without our loyal convention-goers, volunteers, exhibitors, and of course, our main special guests: animation director Toshihiro Kawamoto, cosplayer Reika, and voice-actress Kotono Mitsuishi.”

Organisers have already started planning for next year’s convention with SMASH! 2015 dates still to be confirmed at this stage.
“It is great to see many fans having a good time with like-minded peers at a Japanese pop-culture convention like SMASH!,” Elinon said.

“We plan to take this year’s success and deliver an even superior experience at SMASH! 2015. We hope to see everyone again next year!”

More information will be published over the next twelve months in the lead up to SMASH! 2015. For general information, visit www.smash.org.au.

Check our coverage ON THE SPOT at Smash! 2014 here