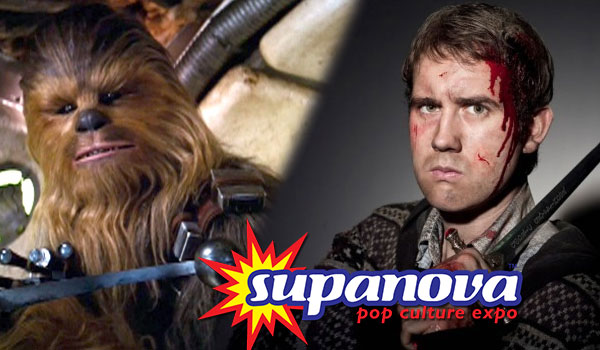 Matthew Lewis was thrust into the limelight from an early age playing Hogwarts pupil, Neville Longbottom, in all eight Harry Potter films. Fast-forward post HP, Matthew has continued with acting and recently filmed the drama, Me Before You, in addition to his recurring role on the television series, Bluestone 42.

Peter Mayhew has enjoyed portraying one of the most popular characters in the history of the Star Wars universe, the mighty Wookiee Chewbacca, and can hardly wait to see the fan response to Star Wars Episode VII: The Force Awakens this December – which makes this a massive coup for Supanova’s fans.

Our local stars aren’t being outshined however with Matt Nable representing the hit-series Arrow as the villainous, Ra’s al Ghul. The pro-rugby league player-turned actor has gone from strength to strength with sci-fi film Riddick and the major Australian mini-series Bike Wars: Brothers in Arms (as Jock Ross) and Gallipoli (as sergeant Harry Perceval).

Keeping with the homegrown theme, and going behind the scenes, is Greg Van Borssum – an Australian fight designer and weapons consultant for feature films. An accomplished athlete and martial artist, Greg worked as the Fight Choreographer and Weapons Specialist on the critically acclaimed Mad Max: Fury Road. Previously he was Digital Crowds and Motion Capture Director on the animated films, Happy Feet and Happy Feet Two.

Lastly, from one of the most successful anime franchises of all time, voice-actors  Sean Schemmel and Christopher Sabat are joining fans this November. The pair voice the lead characters from Dragon Ball Z, Goku and Vegeta respectively, including the recently released theatrical feature, Dragon Ball Z Resurrection. Sean and Christopher have a ‘Kamehameha’ amount of other voice credits between them, including the animated series’ One Piece, Teenage Mutant Ninja Turtles and Fullmetal Alchemist.

With tickets on-sale from October 1st from Moshtix these guests look forward to meeting their fans, signing autographs, and posing for studio portraits at Supanova. There will be Q&A panels in both cities where fans will have the opportunity to ask direct questions of the Supa-Stars.

They join a larger lineup of celebrities that include guests from film, television, animation, comics and fantasy/sci-fi writing, including:

Barbara Eden: I Dream of Jeannie

Sarah J Maas: author of the Throne of Glass series

Isobelle Carmody: author of the Obernewtyn Chronicles and Greylands

Trudi Canavan: author of The Black Magician and Age of the Five trilogies

Kate Forsyth: author of Bitter Greens and The Witches of Eileanan series