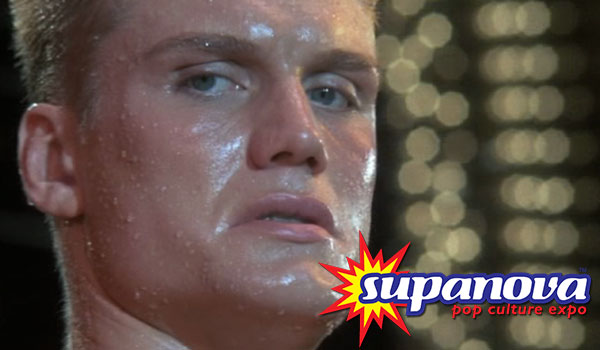 Supanova Pop Culture Expo’s latest guest announcements come with a mixture of panache, verve, strength and style that will have fans over the moon in anticipation of meeting them at the Melbourne (11 &12 April) and Gold Coast (18 & 19 April) events.

Muscle-man Dolph Lundgren has made an amazing career comeback in recent years. Best known for starring roles in the films Rocky IV, Masters of the Universe and Universal Soldier, Dolph reaffirmed his action hero status in The Expendables 1, 2 & 3, alongside Hollywood heavyweights Sylvester Stallone and Arnold Schwarzenegger. Dolph is currently working towards his latest release, Skin Trade – a thriller he starred in, co-wrote and produced.

Australian-New Zealand actor Manu Bennett currently stars as ASIS agent Deathstroke in the comic-adapted television series Arrow, and is no stranger to action. On the small screen he played Crixus in the sword-and-sandal slasher series Spartacus: War of the Damned/Gods of the Arena, and Marc Antony in Xena: Warrior Princess; on the silver screen he appeared as Azog the Defiler in Peter Jackson’s epic Hobbit trilogy.

These Supa-Stars and more look forward to meeting their fans at Supanova in April. They join an outstanding line-up of celebrities already announced for the Melbourne and Gold Coast expos, including: