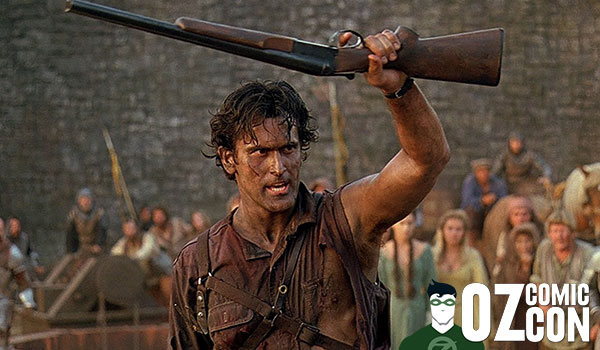 Bruce Campbell, best known for his roles as Ash Williams in The Evil Dead franchise and as Sam Axe on Burn Notice, is the latest guest to join the ever-growing line-up for Oz Comic-Con Melbourne this June.

Campbell has had a long and varied career, spanning film, television, voice acting, producing, directorial and writing credits. Highlights outside of The Evil Dead and Burn Notice include roles in Xena: Warrior Princess, Cloudy With A Chance of Meatballs and The Adventures of Brisco County, Jr., as well as his two books If Chins Could Kill: Confessions of a B Movie Actor and Make Love! The Bruce Campbell Way.

Due to filming commitments, Campbell will attend Oz Comic-Con Melbourne on Saturday, 27 June only. While at the show, fans can attend an exclusive Q&A panel, as well as take part in professional photograph and autograph opportunities with the horror legend. To ensure fans don’t miss out, the Evil Dead speciality ticket is now on sale for those fans who want to secure their spot in the limited photograph and autograph opportunities.

Tickets to Oz Comic-Con Melbourne are available now through www.ozcomiccon.com in a range of options and packages to suit every fan. To make spending an awesome weekend at Oz Comic-Con even better, when you purchase a general admission ticket online, you also receive a free ticket for a child twelve years and under.

Oz Comic-Con Melbourne will be held on Saturday, 27 June and Sunday, 28 June at the Melbourne Convention and Exhibition Centre. Oz Comic-Con brings attendees the very best in film, television, voice acting and comic guests. With exclusive panels, a huge range of merchandise and fun activities for the entire family, Oz Comic-Con Melbourne is the place to be this June.