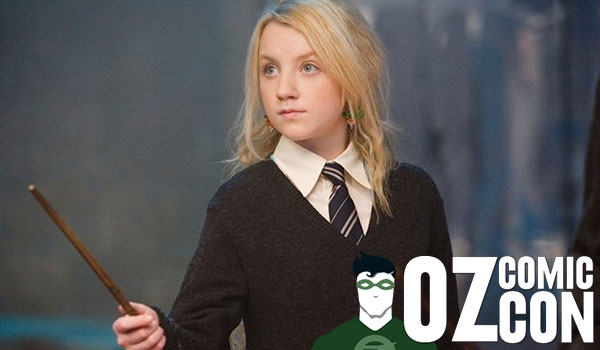 Break out your spectrespecs, put on your butterbeer cork necklaces and make sure to pack your Quibblers – Evanna Lynch, best known for her role as quirky Hogwarts student Luna Lovegood, is catching the Floo straight into Oz Comic-Con Brisbane and Sydney. Joined by fellow Harry Potter alum Robbie Jarvis (young James Potter), Lynch will be bringing magic to Australian muggles on September 19-20 (Brisbane) and 26-27 (Sydney).

A diehard Harry Potter fan before being cast in Harry Potter and the Order of the Phoenix, Lynch understands the love and passion shared by fans at Oz Comic-Con all too well. In the post-Potter world, Lynch has appeared in the film G.B.F, as well as in the UK stage tour of Houdini in 2014. She will also appear in the upcoming film, My Name is Emily.

Lynch and Jarvis will be signing autographs and taking part in professional photograph opportunities (if only wizarding photos were real!), as well as answering questions about everything in the Potter-verse in exclusive Question and Answer panels. An extremely limited number of places are also available at a special meet and greet event with Lynch and Jarvis on the Saturday night of each show. Potterheads should buy their tickets as soon as possible to secure their place at this magical event.

With family friendly activities, exclusive workshops, outstanding cosplay, an amazing range of vendors and some of the top comic-book talent, Oz Comic-Con is an unmissable event in Brisbane and Sydney this September.

Oz Comic-Con will be held in Brisbane at the Brisbane Convention and Exhibition Centre on September 19-20. Tickets and tokens are on-sale now from www.ozcomiccon.com.