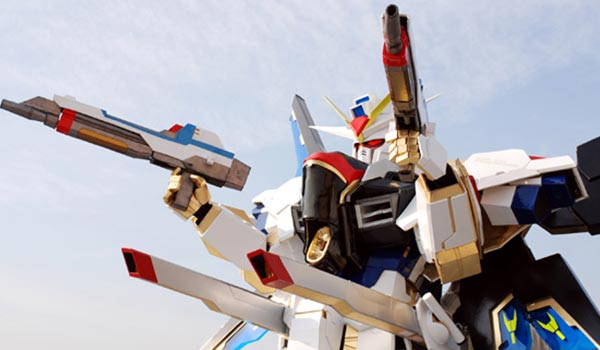 Get ready for more cosplay action at SMASH! Sydney Manga and Anime Show! Taking cosplay fever to a whole new dimension, SMASH! is thrilled to announce that the highly renowned mecha cosplayer, TAKAHIRO (GOLDY) SAKAI, will be a special guest at SMASH! 2016.

With over ten years experience in constructing mecha costumes and armour accessories, GOLDY has become one of the world’s greatest craftsmen.

Inspired by mecha characters from Japanese pop-culture such as Gundam and Evangelion, Goldy has been attracting fans around the world including superstar cosplayers Kaname and Reika. Amongst the thousands of cosplayers that attend SMASH! in vibrant costumes every year, SMASH! President Andrew Qiu believes “mecha cosplay is an incredibly rare yet highly respected genre”. “Believe it or not, Gundam has played a significant role in Japanese pop-culture for over thirty years now,” Qiu said. “Coming all the way from Japan, we cannot think of a better guest than Goldy to share his knowledge and skills with mecha cosplayers. Goldy’s attendance affirms the idea that the art of cosplay promotes diversity, and intercultural exchange at conventions like SMASH!.” Fans will have the opportunity to meet Goldy at the convention, and attend unique demonstration workshops. Cosplayer Goldy will join previously announced guests: Japanese voice actor Hideo Ishikawa (Naruto), Japanese voice actress Ai Nonaka (Puella Magi Madoka Magica) and cosplayer Yuegene Fay. SMASH! 2016 is a pop-culture convention to be held at Rosehill Gardens on August 20th and 21st.

Featuring a line-up of cosplay, gaming, and anime events, SMASH! Sydney Manga and Anime Show is an event not to be missed. For more information, visit www.smash.org.au.