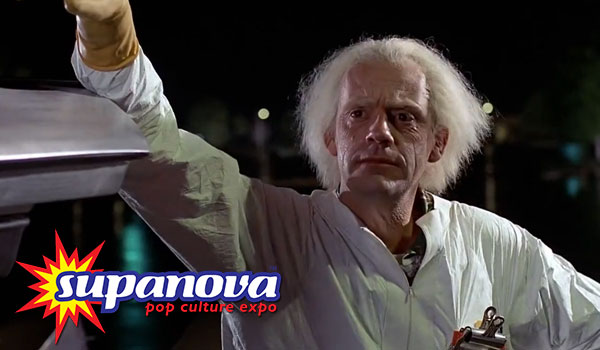 Synchronise your watches and prepare the DeLorean; Supanova Pop Culture Expo is breaking the time barrier with more guest star announcements for their Melbourne (11 &12 April) and Gold Coast (18 & 19 April) events.

What time is it? According to Back to the Future, flying cars, hoverboards, and self-lacing kicks are all the rage in 2015. While these plausible predictions are yet to realize their potential, the trilogy’s legacy has maintained a prevailing popularity since its first film in 1985.

To celebrate the 30th anniversary, Christopher Lloyd is coming back to Supanova! Spanning a remarkable career in film and television, Christopher is well known for his portrayal of Uncle Fester in The Addams Family, Judge Doom in Who Framed Roger Rabbit and as the eccentric inventor, ‘Doc’ Brown in the Back to the Future trilogy. Christopher returns to Australia for the first time since his last appearance at Supanova in 2012.

In further great news, sailing into Supanova direct from the set of Dead Men Tell No Tales, are Martin Klebba and Kevin McNally. The pair are in Australia to film the 5th installment of Pirates of the Caribbean, which is about to begin production in Queensland.

Martin, an actor and stunt professional since the ’90s, has appeared in dozens of feature films including Mirror Mirror and Hancock, and television shows The Cape, and Scrubs. However Martin is probably most recognised as Marty in the Pirates films: The Curse of the Black Pearl, Dead Man’s Chest, and At World’s End. Martin will appear on the big screen later this year as Chucky in Ted 2, due for international release mid-2015.

Time travel is a cinch for Kevin, who starred in the 1984 series Doctor Who: The Twin Dilemma. While Kevin’s film career started with the Bond epic, The Spy Who Loved Me it was his role as Joshamee Gibbs in Pirates film, The Curse of the Black Pearl that truly put him in the international spotlight. Kevin appeared in 4 further installments of the series; Dead Man’s Chest, At World’s End and On Stranger Tides, making him one of the only three actors in the franchise to star in all four films.

Unfortunately Merlin star, Eoin Macken has been called away to complete the filming of the new television series The Night Shift and will be unable to attend the April expos.

So come along and have the time of your life. These Supa-Stars join an outstanding line-up of celebrities already announced for the Melbourne and Gold Coast expos, including:

Georgina Haig: Elsa, Once Upon a Time

Sean Maguire: Robin Hood, Once Upon a Time, Leonidas, Meet the Spartans